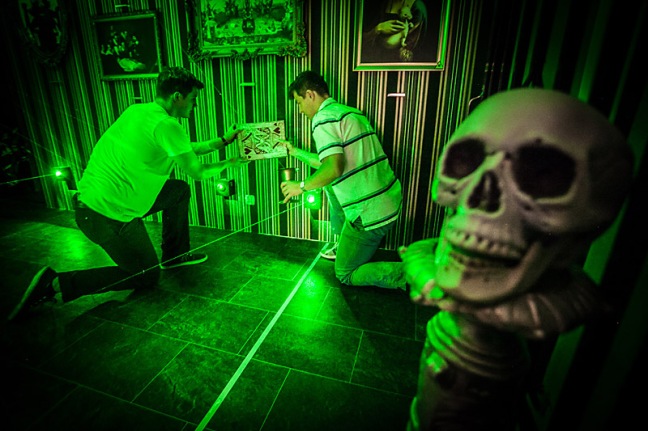 In the last few years, a new form of entertainment has grown—escape rooms. The Greater Vancouver area has probably close to ten of these things. They seem to be popping up all over the place. Recently, I’ve been to a few and enjoyed myself thoroughly.

The underlying idea of an escape room is that you and a few friends are locked in a room and have to find your way out using what you can find in the room. Of course, you can’t just smash your way out, but rather have to solve a series of “puzzles” in order to do so. For instance, typically the “room” is actually a series of rooms separated by locked doors. So, a puzzle might involve trying to determine the combination for the lock on a door, or finding the location of the key.

While all the escape rooms seem to have these features in common, because each escape room is built around a story and theme, they can feel quite different. For instance, I’ve been an archeologist in an underground temple after the entrance collapsed, a secret agent imprisoned by a malevolent regime, and a detective investigating the disappearance of a colleague in a butcher shop.

Thus though the types of puzzles tend to be similar, each scenario has a different feel to it, which I enjoy. None of the stories is hugely detailed—since you only have 45 minutes to solve the puzzle, you don’t have time for a convoluted story—but the lack of detail is more than made up for by mood and mystery. For instance in the prison escape, you start out in bright orange prison overalls, your head covered by a black back, handcuffed to the wall in a small cell (think ‘Guantanamo’).

I’d guess that at least half of the puzzles involve identifying a four or five digit number that will open a lock, so typically the first task in any room is to identify any locked doors or boxes, and look for clues that will open them.

Sometimes, combination codes are hidden in miscellaneous numbers around the room (e.g. a birthday on a driver’s licence left in a coat pocket), but more often the numbers have to be assembled (e.g. six packages of meat, each with a fingerprint on it, had a single number highlighted. By matching the fingerprints to a police record, we were able to determine the order of the numbers to use to open a combination lock.)

While combinations are most common, there are commonly some unusual scenario-specific features like opening secret doors, decrypting simple codes, reading instructions that only become visible using a black light, hacking computers, and drugging guards with sleeping pills. In general, the constant puzzles and discovery of the story make the 45 minutes pass by quickly.

I only have a few minor gripes when it comes to these puzzle rooms. First, the time limit is problematic, especially the first time you try one of these rooms.  It probably takes about a half hour just to become accustomed to “how things work”, and then you’re nearly out of time. Or, if you get stuck on a single puzzle—or mess up entering a combination on a lock—you can easily burn half your time on one puzzle and not have any time for the remaining eight puzzles. There is certainly a learning curve, and I suspect very few people are successful the first time they ever try an escape room.

Second, almost all of these stories are hindered by unrealistic scenarios, like passwords that are easy to work out, or security camera footage that a murderer recorded of their murder and didn’t bother deleting. Of course, it’s perfectly understandable why these gaps exist—there need to be clues so you can solve the puzzles. Nevertheless, these problems do hurt the storytelling by taking you out of the moment.

Finally, it can be difficult to solve the puzzles in scenarios where you don’t think like the puzzle designer. For instance, in the prison escape, when we were shackled to the wall in the cell, the puzzle designer decided the first thing we needed to do was to open the cell doors.  To us, this was nonsensical—if you’re shackled to a wall, there’s no reason to open the cell door since you can’t go anywhere anyway. It makes more sense to release yourself first. Luckily, two of us actually know how to pick the locks on children’s handcuffs, so we released ourselves before opening the door, but, in doing so, we “broke” the scenario. We were “supposed” to remain handcuffed for a third of the time, not get out of the handcuffs right away.

Despite these minor gripes, we had a great time at these escape rooms, and they become more fun the second time. So many video games revolve around puzzle-solving, and in a way, this simply takes that sort of co-operative gameplay and makes it physical. I’d recommend trying these for anyone who enjoys puzzles and isn’t claustrophobic.

One thought on “The Great Escape”