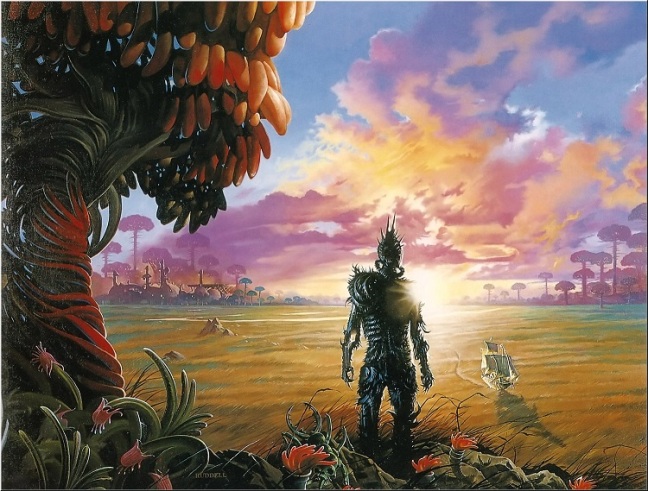 Perhaps my favorite novel is Hyperion/The Fall of Hyperion by Dan Simmons.  Perhaps it would be considered cheating, having a favorite novel comprised of two novels.  However, I don’t think it is, as Hyperion doesn’t really have a proper ending, in any real sense of the word—almost nothing is resolved in the first book. Nevertheless, even if the second book hadn’t been published, Hyperion is still worth reading on its own, though there would be no closure.

Set in the distant future, Hyperion follows seven pilgrims on their journey to the mysterious Time Tombs. There, legend says that the enigmatic monstrous Shrike will slaughter all but one of the pilgrims and grant the remaining pilgrim their wish.

Hyperion has an unusual, Canterbury Tales-like structure with a large majority of the book comprised of the pilgrims telling each other their stories. I think normally, this structure would completely turn me off, but it in this case, it really works. Each of the stories is in a different sci-fi sub-genre—horror, mystery, military, etc. and each story is compelling in its own right, both in terms of plot and the character development. Yet each piece also fits nicely into the bigger puzzle, the broader story.

There are several reasons why I like Hyperion. First, it does the best, most creative world-building I’ve ever seen in a novel. I think it has more cool ideas per page than any other book I’ve read, and, though the world is amazingly complex, as a reader, it never felt as though I was slogging through pages of world-building. Rather, everything was conveyed within the context of the story.

Other people liked Hyperion too—it won a well-deserved Hugo in 1990. I’d recommend this novel to anyone who enjoys fascinating science fiction ideas.